The working principle, advantages and disadvantages of x ray detectors

Specific principle:
1. Before the exposure, the cations on the silicon surface are stored to generate a uniform charge, resulting in an electron field on the silicon surface;
2. During the exposure, electron-hole pairs are generated in the silicon, and free electrons are released to the surface, resulting in a potential charge image on the silicon surface. The charge density at each point is equivalent to the local X-ray intensity.
3. After exposure, the X-ray image is stored in each pixel;
4. The semiconductor converter reads out each prime and completes the analog-to-digital conversion.
Advantages:
1. High conversion efficiency;
2. Wide dynamic range;
3. High spatial resolution;
4. The X-ray absorption rate is high in the low resolution area (the reason is that its atomic number is higher than amorphous selenium)
5. Strong environmental adaptability.
Disadvantages:
1. DQE is not as good as amorphous selenium at high doses;
2. There is a slight scattering effect due to the fluorescent conversion layer;
3. The sharpness is relatively slightly lower than the amorphous selenium type. 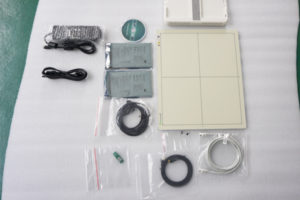