The structure of the indirect FPD is mainly composed of a scintillator or a phosphor layer plus an amorphous silicon (a-Si) having a photodiode function and a TFT array. The principle is that after the X-ray exposure of the scintillator or the phosphor layer, the X-ray photons are converted into visible light, and then the amorphous silicon layer functioning as a photodiode becomes an image electrical signal, and finally a digital image is obtained. 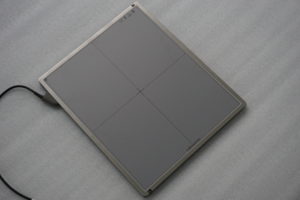 In the image acquisition of indirect FPD, there is a problem of scattering of light due to the process of converting into visible light, resulting in a decrease in spatial resolution and contrast resolution of the image. The scintillator currently has mainly cesium iodide (CsI, also used for image intensifiers), and the phosphor has bismuth oxysulfide (GdSO, also used for intensifying screens).

Previous: What kinds of structures are commonly used for indirect conversion flat panel detectors? Next: Features and advantages of digital X-ray image (DR)