Amorphous selenium (a-Se) is a direct x-ray detector structure, which is mainly composed of a collector matrix, a selenium layer, a dielectric layer, a top electrode and a protective layer. The current collection matrix is ​​composed of thin-film transistors (TFTs) arranged in array elements. The amorphous selenium semiconductor material is vacuum-evaporated above the thin-film transistor array to produce a thin film about 0.5 mm thick and 38 mm × 45 mm square. It is very sensitive to X-rays and has a high image resolution capability.
The top electrode is connected to a high-voltage power supply. When X-rays are incident, due to the electric field formed by the high-voltage power supply on the surface of amorphous selenium, they can only pass through the insulating layer, X-ray semiconductor, and electronic sealing layer in the direction of the electric field to reach amorphous selenium There will be no lateral deviation and therefore light scattering. The amorphous selenium array directly converts X-rays into electrical signals, which are memorized in the storage capacitor. The pulse control gate circuit turns on the thin-film transistor, and sends the charge stored in the storage capacitor to the output of the charge amplifier to complete the conversion of the photoelectric signal. After conversion by the digitizer, a digital image is formed and input to the computer, and the computer restores the image on the monitor and the doctor directly observes the monitor for diagnosis. 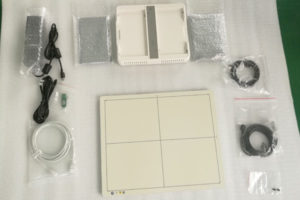 Previous: India and Russia import a large number of X-ray equipment to deal with COVID-19 Next: The number of new coronavirus infections in the world exceeds 4.34 million cases, and the U.S. gradually confirms nearly 1.41 million cases