Amorphous silicon X-ray flat panel detector is indirect digital X-ray imaging. Its basic structure is that the surface is a layer of scintillator material, and the next layer is a photodiode circuit made of amorphous silicon. , The bottom layer is the charge readout circuit.

The scintillator located on the surface of the X-ray flat panel detector converts the attenuated X-rays after passing through the human body into visible light, and the amorphous silicon photodiode array under the scintillator converts the visible light into electrical signals, forming storage on the capacitance of the photodiode itself Charge, the amount of stored charge of each pixel is proportional to the intensity of the incident X-ray. Under the action of the control circuit, the stored charge of each pixel is scanned and read, and the digital signal is output after A/D conversion, which is transmitted to the computer for image processing. Form X-ray digital images.

In the direct conversion X-ray flat panel detector, since there is no visible light generation, no scattering occurs, and the spatial resolution depends on the size of the thin film transistor matrix in the unit area. The larger the matrix, the greater the number of thin film transistors, and the higher the spatial resolution, which can be achieved with the improvement of technology. 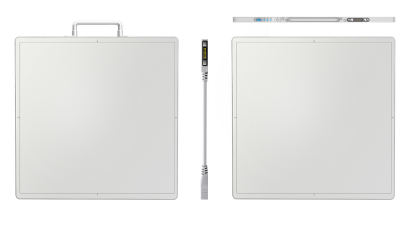