A report released on the 12th showed that during a rehearsal in a choir in Washington State, a patient with new symptoms of pneumonitis infected 86% of the participants and was officially recognized as a “super spread event.”
According to a report by Fox News of the United States, the report’s writer Lee Hamner said that on March 10, 61 members of the Skagit Valley Choir participated in two and a half hours of training in Mount Vernon. The patient felt uncomfortable and didn’t know what disease he had at the time, but was later diagnosed with the new coronavirus. The report pointed out that the training led to the infection of 52 members and two died without treatment. Lee Hamner said in the report that the outbreak was a tragedy. It is reported that nearly two weeks after the incident, the state issued a “home ban”.
Skagit County Public Health Department stated that the choir’s practice provided an opportunity for respiratory transmission, and members “sited next to each other, shared snacks, and reorganized their chairs together after the end.”
According to the report, after the incident, the choir quickly contacted the members. Many members took the initiative to isolate themselves and reported to the health department in a timely manner. The Skagit County Public Health Department provided them with guidance on isolation and quarantine. Contacts were followed, to a certain extent, blocking the further spread of the new coronavirus.

According to the constituent materials and working principle of the flat panel detector, DR is mainly divided into three major technologies: CCD, one-line scanning, amorphous flat plate (amorphous selenium, amorphous silicon + cesium iodide / amorphous silicon + gadolinium oxide).
1. CCD: Due to physical limitations, experts generally believe that large-area flat-panel image capture CCD technology is inadequate, and CCD equipment has a certain gap in image quality from amorphous silicon / selenium flat-panel equipment, but it has a relatively price advantage; Several manufacturers use this technology such as Swissray.
Second, one-line scanning: also known as one-dimensional line scanning technology, invented by the Institute of Nuclear Physics of the Russian Academy of Sciences, which is the DR produced by ZTE in China; it has the advantages of low exposure dose and lower equipment cost than flat panel technology, but There are fatal defects such as long imaging time (several seconds), low spatial resolution (1mm / lp when it was first launched), and low efficiency of X-ray use; the imaging quality is poor and patients will receive a lot of unnecessary radiation.
3. Amorphous flat plate: amorphous selenium / amorphous silicon; mainly composed of amorphous selenium layer (a-Se) / amorphous silicon layer (a-Si) and thin film semiconductor array (TFT). 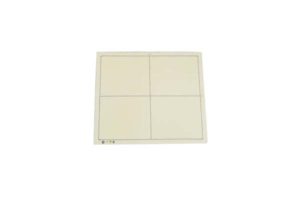